Nominatim transliterates all scripts to Latin to make sure that search works across different scripts. The standard transliteration does not work for all languages equally well. This tutorial shows how to add custom transliterations for selected areas of the world using the example of Cantonese in Hongkong.

This tutorial assumes that you have read about the ICU tokenizer and have some experience with programming in Python.

Transliteration is the conversion from one script to another. It is an important topic in geocoding because it enables users of one script to search for places in areas where a different script is used. When you type a query into the search box, this query is usually transliterated into Latin script. The same has happened with the place names when they were imported from OpenStreetMap data. They are not saved in their original script in the search index but are first transliterated to Latin. As a result, it does not matter in what script the place name was in or how the query was typed. As long as the transliteration matches, it will be found.

We cannot simply assign different methods of transliteration for Cantonese and Mandarin names. When a user types a query, we don’t know in advance if they are looking for a name in Cantonese or Mandarin. However, what we can do is to add an additional transliteration to Cantonese names. This means they will show up in the search index with the standard Pinyin transliteration and the correct Cantonese transliteration. The user then can find the names in both Chinese script and the Cantonese romanization of the name.

This tutorial shows how to write your own custom token analysers that work for a very specific part of the world and add an additional transliteration variant.

Note: much of the code in this tutorial was inspired by Sven Geggus’ transliteration service for the German OpenStreetMap map style. Have a look at the project if you are interested in other transliterations that he has used.

Writing your own token analysis

When you want to add an additional variation to a place name to the search index, then the token analysis module is the right place to start. It takes a name from OSM and creates all the tokens that are eventually added to the search index. The generic token analysis has some powerful mechanisms to create spelling variants for a single name. But it is not well suited for a logographic script with thousands of symbols. Instead we are going to use the pinyin-jyutping-sentence library, which does all the heavy lifting for us.

Setting up the custom module

configure() and create() are the two functions called by Nominatim to set up the token analyzer. The CantoneseAnalysis class implements the actual analyzer. At the moment, our analyzer does the minimum that the name can be found as is: it needs to run the global norm transliteration and the global trans transliteration on the input name. The search frontend will later do exactly the same with the incoming query. So to make sure that search entry and query can match, never forget to apply these two transliterators.

To use your custom token analysis, you need to customize the configuration of the ICU tokenizer. Copy the default configuration from settings/icu_tokenizer.yaml into your project directory. Make sure it keeps the name icu_tokenizer.yaml. There are already a lot of language-specific token analysis modules set up. Add your custom module for the zh language in the appropriate section:

If the analyzer is the name of a Python file, then Nominatim will try to find the file relative to the project directory.

You also need the ‘zh’ language to the whitelist of languages that are tagged by the tag-analyzer-by-language sanitizer:

This makes sure that your analyzer zh is called for all names with a :zh suffix. These are names in Chinese script as per OSM tagging convention.

You can run the new configuration against a small import now. It should run successfully through but change nothing because right now our analysis does the same as the generic analysis when run without configuration.

Now it is time to add the jyutping transliteration library. First install the library via pip:

We need only one function from the library: jyutping() which transliterates names using the Cantonese romanization we want. Adding an additional variant in the compute_variants function is simple. Change the function in your cantonese_analysis.py module like this:

The first line adds the usual transliteration to the list of variants. This is important to do or you won’t be able to find the places in Chinese script anymore. Next we compute the Jyutping transliteration. The function returns a romanized string but not necessarily a string that is compatible with the transliteration used by the query frontend. For example, Jyutping adds accents to mark the tones. Nominatim’s default transliteration does not have any accents. That is why the result is transliterated again with the trans transliterator. You should always do this to be on the save side. Sometimes you may even have to run your transformation results through the norm transliterator again, too. This is for example the case when your transformation results in upper case letters. These are already removed during normalization in the default configuration. Have a look at the ICU rules for normalization in your icu_tokenizer.yaml to understand which transformations are done when.

These are all the changes needed to add the custom transliteration. Let’s try this out. The Jyutping transliteration for Hongkong(香港) is ‘Hōenggóng’. Searching on nominatim.openstreetmap.org yields no results. If we import an extract of Hongkong with the custom token analysis, the search works well: 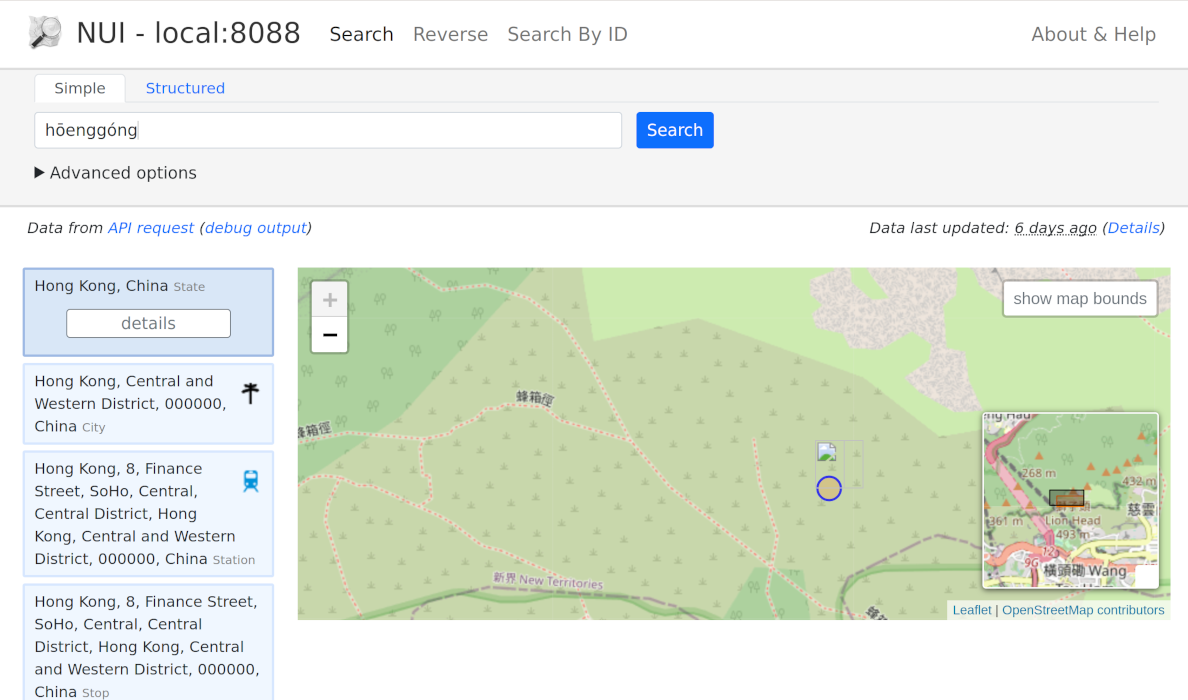 Searching for ‘香港’ works too, of course.

Writing your own sanitizer

The token analysis adds Jyutping transliteration but it has a minor flaw. It adds the transliteration to all names in Chinese script including those in areas where Mandarin is spoken. It doesn’t hurt but it adds unnecessary variants which increase the database size and may lead to false positives in the results. Therefore, in a second step, we want to restrict the use of our new token analysis to places in Hongkong. This is the task of a sanitizer. It goes through the names of the input data and transforms them before they are prepared by the token analysis. The sanitizer also decides which token analysis module will be used for each name. This is what we need.

Setting up a custom sanitizer

Like above, lets start with setting up a simple custom sanitizer that does nothing. This is done exactly in the same way as with the token analysis: add a Python file with the sanitizer implementation to your project directory. Here is the basic outline of a sanitizer module:

The core of a sanitizer is a function that processes a place information and manipulates names and address names in place. The function again needs to be returned through a create() function exported by the module.

Save the code as tag_cantonese.pyin your project directory. Now you can add it to the list of sanitizers in your icu_tokenizer.yaml:

Make sure to add your sanitizer to the end of the list. Sanitizers are executed in the order that they been put in the list. In our case we would like to benefit from the processing of the other sanitizers, for example, from the one that splits list of names into single items.

That is all, your sanitizer will now be used for the next import.

Using a sanitizer to filter by area

The sanitizer function receives an object with three fields:

The place information has already information in which country the place is located. This is however not much use in the case of Hongkong as this is part of China. To find places in Hongkong, we have instead of compare the centroid location of the place with the area of Hongkong.

We use the shapely library for the geometry operations. If you are on Ubuntu/Debian, you can install it through apt:

Otherwise, you can install shapely via pip:

The osml10n project already has a simplified geojson of Hongkong, which we can use for our purpose. Go to the project directory, then download the file:

Now the sanitizer needs to load the geojson into a shapely geometry. We use prepared geometries here, because they are much faster to use later. Add the following code to your custom sanitizer:

Now all the parts are in place to implement the actual sanitizer function. Change the create() function as follows:

When the create function is called, it first creates a fresh shapely geometry for us. The sanitizer function itself first checks if the object has any names at all and then if the place is inside our Hongkong polygon. Then it goes through all the names and where it finds one that is in Chinese script (the ones with name suffix ‘zh’) then it sets the ‘analyzer’ attribute so that our custom analyzer is used.

Where to go from here

The examples in this tutorial are just meant to give you a first introduction into sanitizers and token analysis. They can be used for many more pre-processing tasks. Have a look at the modules that ship with Nominatim to get an idea about what can be done.

One thing to keep in mind when developing your custom code is performance. Sanitizer and token analysis functions are called for every single place to be processed that’s nore than 200 million times for a planet import. Making sure that your custom modules are efficient can easily make difference of a day for so much data.