Postcodes are a curious thing. Not every country in the world has them. But where they do, postcodes tend to play an important role for locating areas. If you are in a country with postcodes, you likely know your home postcode by heart and will be regularly asked for it. And because you have to remember it, it makes sense to also use it when searching for places. It’s much shorter and more precise than a full address. Time to take stock of postcodes in OpenStreetMap to see how useful they are for geocoding.

Nominatim uses postcodes in two different ways. First of all, it needs to make postcodes searchable. That means having a database of all existing postcodes for every country together with its approximate location. Second, it wants to be able to present a postcode for every result, even if the found place doesn’t have a postcode mapped. That means inferring the postcode from the surrounding objects.

Postcodes can be mainly found in two forms in OSM: as part of an address or as a self-contained postcode area.

Postcode areas are multipolygons with a boundary=postal_code tag. They are a rare occurrence as the map below shows. Only France, Germany and Hungary have a full coverage with postcode areas. Belgium still has coverage for a good part of the country. The coverage in other countries is so patchy that it is fair to assume that the data is not up-to-date.

So what about the rest of the world? There is still a lot of postcode information found in the form of addresses.

Postcodes in addresses are tagged with addr:postcode and give us the most accurate information about the postcode for a single spot on the map. There are approximately 84 million postcode tags in the world and Taginfo shows that they are neatly distributed over the planet. 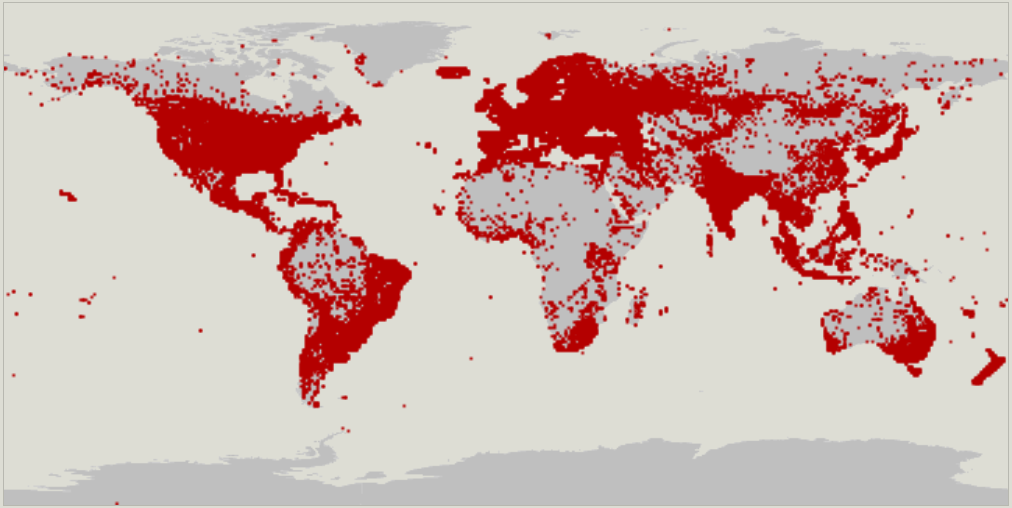 In fact, they are dense enough that it is possible to infer a postcode for most inhabited places on the planet, simply by looking up the closest addr:postcode tag. The question is: how reliable are the postcodes mapped in OSM?

The quality of postcodes

To get an estimate of the quality of postcodes we can start with a simple check: has the postcode the format that we would expect for the country. Luckily, Wikipedia has a handy list of postcode formats in the world, a perfect starting point for a quality check of OSM. It turns out that postcodes are fairly regular. Most countries opt for a simple 4, 5 or 6-digit number. A handful of countries adds the letters A-Z and optional spaces to the list but that is it. The record for the longest postcodes are held by Iran and Ghana with a length of 10 characters. You won’t be surprised to hear that both countries have a very high rate of formatting errors in OSM postcodes.

To check the OSM data, we just have to turn the Wikipedia list into something machine-readable and have the computer compare it with the OSM data. You can see the result of this analysis displayed below. 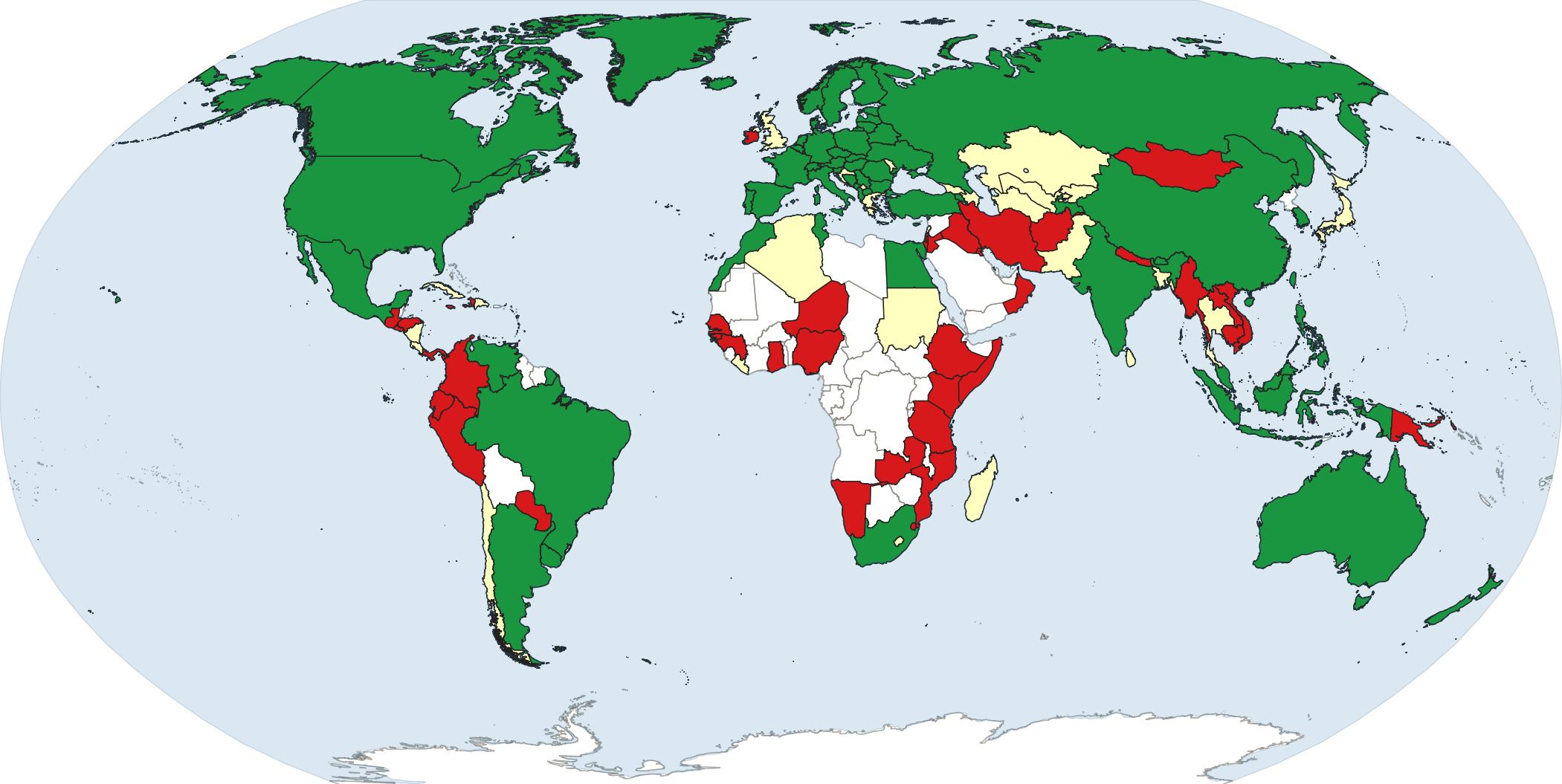 Countries in green have less than 1% of postcodes with an error. Yellow means that less than 10% of the postcodes are wrong. Countries in red have more than 10% errors. Countries that don’t have postcodes have been left white. To be fair, most of the red countries have introduced postcodes very recently and therefore postcode coverage in general is very low at the moment. The quality is bound to improve once postcode usage picks up in general. The clear winners in the statistics are Iceland, Danmark and Liechtenstein. Despite a very dense coverage with postcodes, not a single error could be found.

Fun fact: there is a common kind of error with the addr:postcode tag that is found in many countries: the tag contains the telephone area code instead of the postcode. The age of the letter in writing is clearly coming to an end.

Do you want to have a look at the typical errors and maybe even fix some of them? The Nominatim QA site now includes a view that shows postcodes which do not comply with their country’s official format: 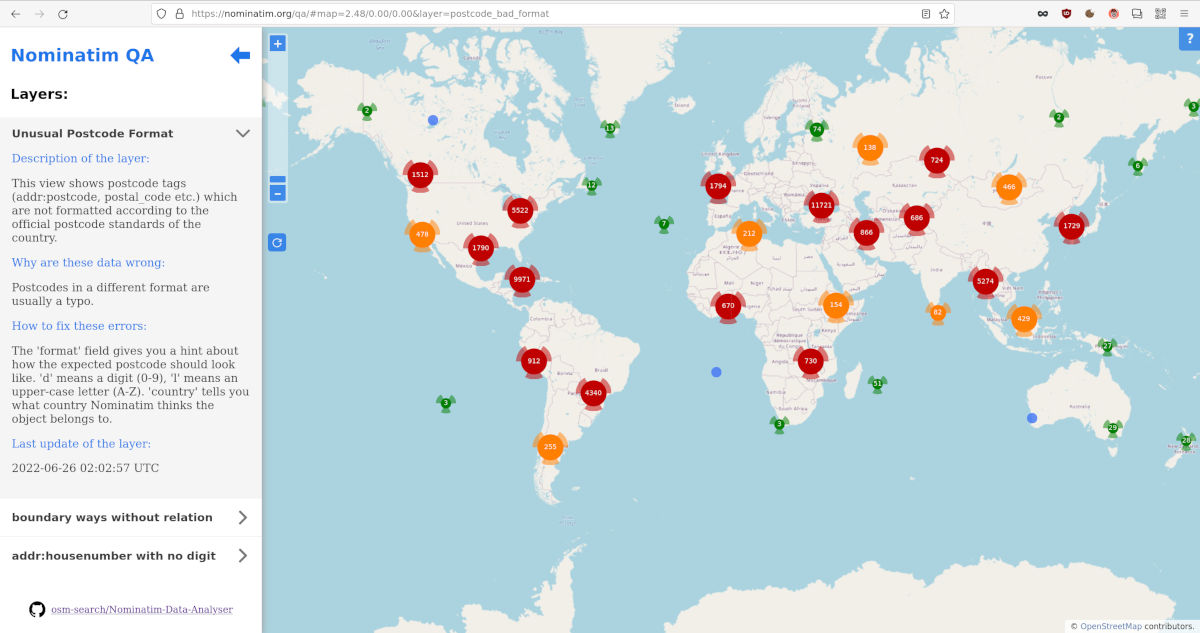 The overall goal for doing the analysis in the first place was to see how postcode handling can be improved in Nominatim. It turns out that filtering suspicious postcodes is a very easy thing to do because postcode formats are so very well regulated and are used quite consistently in OSM.

Starting with the next version, Nominatim comes with a sanitizer for postcodes. It filters out all the postcodes that do not comply with the official format of the country. It will still show you wrongly mapped postcodes for the object where you mapped them. But it will no longer use postcodes that “look wrong” to infer the postcode on neighbouring objects or allow you to search for them.

In the long term, it would be nice to do more detailed consistency checks on the postcodes. Postcodes are usually not assigned randomly but are grouped by area. In France, for example, the first two numbers are always the same as the department number. Hints like these could be helpful to find more mapping errors. This, however, requires more sophisticated methods than a simple regular expression check and is something for another blog post.